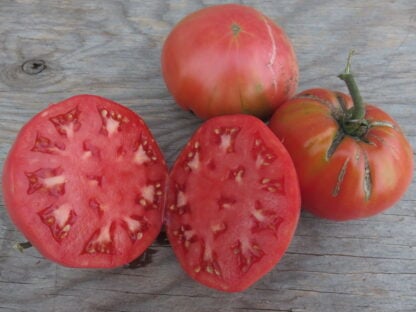 Seeds for this variety were initially donated by a Seed Savers Exchange (SSE) member, Wade Wofford of California who died in 2006, to the SSE’s Heritage Farm some time between 1988 and 1998. Wade obtained the variety through a chain of seed-passing involving members. Wade noted that “A son of the family [who originally shared the seeds] was traveling in Turkey and ordered a tomato slice on a sandwich in a restaurant. The slice overflowed the bread, so he saved out some seeds in a handkerchief and mailed that to his father [who loved large tomatoes] in the USA.”

Turkey is a very rare gem as it has potato leaves which is a very uncommon case with Turkish tomatoes. Unfortunately, we don’t have any information about the locality of this variety but our educated guess is that the seeds for the variety were collected somewhere in Western or Northwestern Turkey where large, pink tomatoes with complex flavors are common. We also think that the seeds for this variety might originally have been brought to the region by Turkish immigrants who left their motherland in Eastern Europe (most probably Bulgaria) in late 19th century or during/after Balkan Wars in early 20th century .

Turkey vigorously grows more than 6′. Plants have very good yields with 4”-5” wide dark pink fruits. Fruits are very meaty, have few seeds, and have beautiful dark green shoulders which fade away as they ripen. Flavor is excellent. Plants did very well in our Florida heat and started producing surprisingly early (60 days after transplant) for a variety with large fruits.

We are proud to be the first commercial seed source for this great heirloom. We also introduced its seeds to gardening community in Turkey with its Turkish synonym, Heybetli. Our special thanks go to the SSE’s Collection Technician (Germplasm Storage and Distribution) Aaron Burmeister who provided the information about the seed history, when we received the seeds in 2013.

Each packet has 20 seeds

Let us know what you think...

What others are saying

There are no contributions yet. 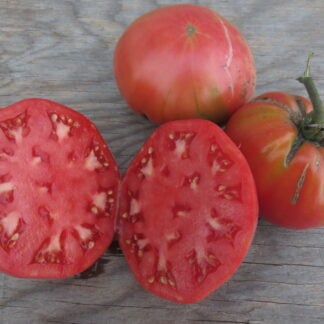