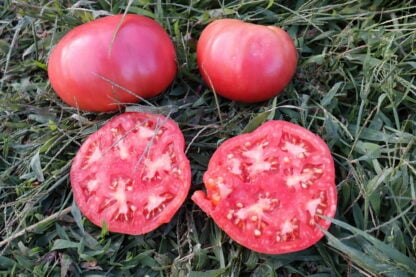 Sugören Pembesi comes from the Sugören (formerly known as Çengiler) Village of Yalova, Turkey, that was founded by the Balkan Turks who migrated to mainland Turkey in 1925. This variety has been grown in the same village since then.

Fruits of Sugören Pembesi are pink, uniformly round, firm, juicy and packed with flavor. We loved eating it fresh but it also is great in salads. Being one of the most prolific heirloom tomatoes we have ever grown in our field, indeterminate plants keep pumping fruits until frost. Although fruit skin is thin, we didn’t observe any cracking throughout the season. If you are an heirloom tomato enthusiast, we strongly recommend you to try this one.

We originally received seeds from two different sources for this variety. One being a grower who purchased the seeds from the Sugören Village co-op for us, paying 95 Turkish cents (Kuruş) per seed (about half a dollar per seed at the time), and the other one being our dear friend and seed saver, Gökhan Erdinç, who received the seeds from another seed saver who had collected the seeds from the same village, where the tomato originated and has been stewarded. We grew both seeds, and concluded that both sources to be genuine. 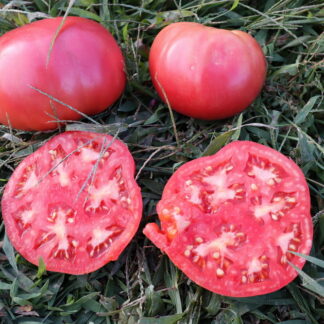