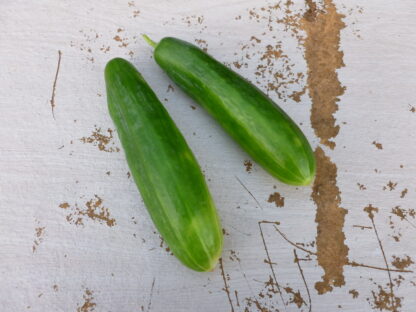 Tweet
SKU: MER1901 Categories: Cucumbers, New and Back for 2021, New for 2020, Our Seed Introductions, Turkish Collection

In Turkey, seed savers usually didn’t feel the urge to name the seeds they historically have been stewarding. Seeds are considered part of the culture, daily life and cuisine; however, they also belong to communities, not to individuals, hence, they don’t need to be identified by specific names. There are many regional farm and kitchen traditions throughout the whole country, and within their own scale, every region adopted different seed traditions. These regions also consist of smaller scale settlements, which are oftentimes villages, that over thousands of years developed their own seeds through collective and community-based plant breeding while they also stayed loyal to their region’s traditions. Therefore, when a seed variety is referenced (i.e. “that cucumber from Meram,” followed by the cucumber’s known traits for identification purposes, if needed) in a region in a given context, everyone knows what that variety is without the need to say a name.

Meram is no exception. It is a wonderful cucumber that has been grown in Meram town of Konya province for generations. It is also very rare these days as the pressure from hybrid seed market and the declining number of seed savers and farmers in the region intensify. Fruits of this variety are 6-7″, and have excellent flavor, crunch and texture. Plants are very productive.

Let us know what you think...

What others are saying